Created in 2017, the Fondation Fiminco embodies the Group Fiminco’s mission to support contemporary creation and access to culture for all, in close proximity to the social and cultural dynamics of Grand Paris.

Fondation Fiminco has invested a former industrial site in Romainville, on the outskirts of Paris and accessible by the metro, to create a place that supports artists from all over the world and open to all audiences. Designed for artists, this project aims to provide space, tools, and support to create a working environment for artists, across disciplinary practices.

This new cultural district brings all the ingredients necessary for a new ecosystem of contemporary creation intended for artists: an artist residency, exhibition spaces, galleries, and soon live performance structures, craftsmen, associations and a concert hall. By investing in this unusual location, the Fondation Fiminco is pursuing its missions to support contemporary artists and providing cultural access for all, as close as possible to the social and cultural dynamics of the Greater Paris. 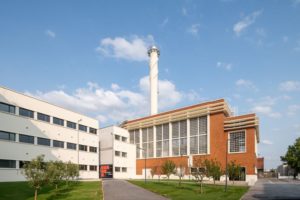 The international artists’ residency is at the center of the project: the Fondation Fiminco main mission is to welcome international artists each year for 11 months, giving them the opportunity to develop their work and their research. Designed as a place open to all audiences, the Fondation Fiminco offers visitors the opportunity to experience contemporary creation, through a program of exhibitions, events and meetings with artists-in-residence.

The aim of the Fondation is not to build and show a collection, but to support artists throughout their creative process, accompanying their professional and artistic development.

The Fondation Fiminco is administered by a board of directors responsible for defining its strategic priorities, ensuring that they are implemented, and making all the decisions in the interest of the Fondation.

The board is composed of eight members, appointed for a period of five years: five founder members and representatives of the personnel of the founder members, and three qualified personalities from the areas covered by the Fondation.

Joachim Pflieger worked at the Opéra national de Paris, Teatro Real in Madrid, and at the New York City Opera between 2006 and 2012, within the artistic management of these multidisciplinary institutions. More specifically, in the field of music and live entertainment, he worked with the conductor Laurence Equilbey for the launch of the Scène Musical program, and within the Centre national de la danse. Furthermore, he was the managing director of the Galerie Thaddaeus Ropac in Paris and Pantin. He directs the Fondation Fiminco and manages the cultural strategy of the Groupe Fiminco.

Having founded and managed her own art gallery in Belleville for four years, Émilie Bannwarth worked for several years as production manager in contemporary art galleries (such as the Galerie Thaddaeus Ropac) and she also managed several artists’ studios (represented by Galerie Emmanuel Perrotin). She works on the implementation and technical development of the Fondation Fiminco and production workshops.

Clara Daquin has worked for different cultural organisations, including the Palais de Tokyo, Lafayette Anticipations – Fondation Galeries Lafayette, the Semiose gallery, the association La Source and The Community collective and multidisciplinary platform. As an art critic and independent curator in Paris, she writes for the press and mounts exhibitions. She is the co-founder of the Revue Alma Mater, a publication dealing with scientific topics in which researchers and artists meet. She is responsible for the coordination of the Fondation Fiminco residencies.

Julia Dartois worked at the Musée national Picasso-Paris as research manager for the museum’s Presidency and for the team of curators, in particular for contemporary programming. She has also worked in Hong Kong as production manager within the Visual Arts pole, for the French May Arts Festival. She is responsible for the Fondation Fiminco’s administrative and legal fields, and works with the production manager.

Sébastien Lamouret worked  for the art & science exhibition space Le Laboratoire in Paris, that produced exhibitions for artists such as William Kentridge, Ryioji Ikeda or Shilpa Gupta and then at Lab Cambridge in Boston as a technical supervisor. As a lighting manager, He followed on tours numerous dance and contemporary circus companies in France and Europe. He works with the production manager on the implementation of the workshops and as a facility manager.

Clémentine Lefranc has worked for different cultural organisations, including the Paris National Opéra as an audience development officer and Paris Musées as a fundraising and partnerships officer.
At the Fondation Fiminco she is responsible for the audience development and the cultural partnerships with the public and private sectors and with associations in Romainville and more largely in Seine-Saint-Denis.

Discover the artists in residency