Curator in residence at Fondation Fiminco.

Anabelle Lacroix is a Franco-Australian independent curator and art critic. Having completed a bachelor’s degree in history of art and anthropology at Paris-Nanterre university, she received a master’s in research of contemporary art history, as an exchange student, at University College London (2009) and also a master’s in curating at Stockholm university (2011). She has worked at the Australian Centre for Contemporary Art (ACCA) in Melbourne as the Curator Public Programs, where she organised conferences, workshops and performances. She also initiated Writing in the Expanded Field, a programme covering art criticism today.

After ten years abroad, Anabelle Lacroix decided to settle in Paris in 2019. That same year, she won a residency and exhibition project for the 30 years of the Archives de la Critique d’Art in Rennes, in partnership with the C-E-A (Association française des commissairesd’exposition / French association of curators). In 2018, she co-edited An Act of Showing: rethinking Artist-Run Initiatives through place (with Maria Miranda, published by Unlikely). She has curated about fifteen exhibitions in Melbourne, in Stockholm at the Natural History Museum, as well as performance programmes in Australia, New Zealand and Taiwan where she was in residency at the Kuandu Museum of Fine Arts, in Taipei in 2016.

In 2020 she was in residence at ZK/U Zentrum für Kunstund Urbanistik – Centre for Art and Urban Planning in Berlin, and she is also associate curator of Liquid Architecture, an Australian independent art space, which studies sound and listening, where she worked between 2014 and 2017. Anabelle Lacroix is particularly interested in experimental forms involving performance, sound, speech and publishing. She favours partnerships, listening and the decompartmentalization of artistic practices.

During her 11-month residency, Anabelle Lacroix will develop an interdisciplinary project on the theme of the “desynchronization” of body and society. She wants to explore the theme of night and insomnia as a form of dissidence, a time for identity transformation, awakening and action. Facing a mechanical daily routine, the night can be considered as a time of freedom, protest or philosophical awakening. However, for many people, sleeping disorders are connected to stress, anxiety and time spent in front of screens, effects of so-called “cognitive” capitalism. Her project, designed in several series, will take the form of exhibitions, performances, screenings and a cultural programme with workshops and debates. 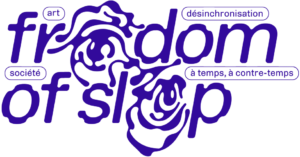